This class was meant to be casual and full of fall receipts. My four companions had been here before and knew the drill: Start on the things that need cooking the longest first. Nancy dove in to the Indian pudding receipt, scalding the milk, mixing the cornmeal and molasses and spices with the cream and adding raisins and eggs. Paul and Heather put together the stuffing for the pork from the receipt of Hannah Glasse with a few twists. We used leftover cheese bread from another workshop as our base for the stuffing. Allan had cut the pork, so it was ready to go.

Heather and Paul put the stuffing on the pork and it was rolled like a jelly roll. Then it was placed on the lacey lamb caul and rolled again. The caul would baste it as it roasted by the fire. Heather reminded Paul that they had seen an episode of “Chopped” that used caul fat, how timely. Paul, using his best boy scout knots, tied string around to keep the caul in place.

Patty started two things at the same time. Multi-tasking! I’m sure our foremothers did a lot of that. Yes, we were going to try and make cheese again. Last workshop it would not curdle, so Patty agreed to give it another try. She also needed to get the pumpkin leather soaked for the soup and heat the milk for the cheese.

Pumpkin played an important role in the Pilgrim diet. There is a poem that goes:

Stead of pottage and pudding and custard and pie Our pumpions and parsnips are common supplies, We have pompion at morning and pompion at noon,  If it were not for pompion we should be undoon.

With the ingredients for Amelia Simmons’ A Nice Indian Pudding, all mixed together, Nancy poured them into individual bowls for baking in the bake oven. Paul and Allan secured the pork to the spit with skewers, ready for the fire. We all had a laugh at the original tin fat catcher. That will be the next order from OSV (Old Sturbridge Village).

While Patty was working on the pumpkin soup, she kept her eye on the cheese, and was rewarded with success. She made a wonderful soft ricotta and proudly displayed it. Now for some chives.

Heather and Paul cut up apples and added lemon zest, butter, cider, sugar and their own choice of spices and added them to the mix; this is Mary Smith’s 1772 receipt.

With the cheese made, Patty gets back to the pumpkin leather that is soaking in chicken broth, sherry, and cream she sautéed the garlic, onions, leeks. When these were soft she added the pumpkin and spices, and put it by the fire, along with the hanging pot of apples sauce, spinach, softening leeks and onion and the pork in the tin oven.

Nancy’s next receipt was the spinach tart. She had placed the spinach and a bit of water in a pot and placed a cover over it and it was steamed over the flames. While that softened she makes the pie crust. This receipt is a combination of Charles Carter’s and William Blackfan’s tart.

In-between receipts, and waiting for our food to bake, roast or steam, the clean-up crew headed for the kitchen and then set the table for our meals.

Patty puts the reconstituted pumpkin in with the leeks, onions and other ingredients. The bake oven has been going for nearly two hours and Paul got the hot job of cleaning it out.

However, his reward is to see that the pork roast is browning nicely and nearly ready.

With the oven clean and at the right temperature, Nancy put in her puddings and tart. I put the mashed applesauce near the fire to keep warm while everyone was busy.

First out of the oven is the Indian Pudding. This receipt does not take as long as some receipts, and is more cake-like than a running soft pudding. Paul whips up a sweat, and the cream for the topping.

Patty served the cheese and the soup with snippets for our first course as Nancy took out the spinach tart from the bake oven. Look at how wonderfully brown the crust is!

The pumpkin soup was delicious and just enough to whet the appetite for what was to come. Paul and Heather brought a bottle of Moonlight Meadery made in New Hampshire. The honey-apple-wine called Kurt’s Apple Pie was an exceptional addition to our meal. This is a sipping wine, for sure; it certainly warms the cockles of your heart. With the first courses a memory, Patty dished out her succotash. Colonists quickly came to depend on corn and beans as vital staples.

Paul did the honors of carving the roast and serving it around the table. As Nancy made sure we all had a slice of her spinach tart, everyone passed the succotash, applesauce and other condiments about.

The pork was tender and moist and the stuffing tasty; it has bacon and savory spices in it, how could it go wrong? The aroma of the pork, stuffing and applesauce and tart together on the plate made your mouth water. I’m not sure what I liked best with the pork, the applesauce, honey mustard, or peach preserve; they were all marvelous. The spinach tart was set well and had a hint of the orange flower water and spices that Nancy had put in it. I still have a piece left that will be gone before I finish this blog.

With our second course digesting, it was time to clear the table, as we talked about our experiences of past workshops, books and many other topics. It was a nice and comfortable day with good friends and fine food.

To end this perfect meal we lingered over the table eating our Indian Pudding with whip cream and enjoying each other’s company.

Thanksgiving, Christmas and Hanukkah are right around the corner, and it is my dearest hope that you will spend it with friends around a table groaning with traditional foods from your mother’s, grandparent’s aunt’s and friend’s receipts. This is the best part of food, sharing it with loved ones.

There will be more workshop is the New Year; stay tune!

“Winter is the time for comfort, for good food and warmth, for the touch of a friendly hand and for a talk beside the fire: it is the time for home.”
Edith Sitwell 1887 – 1964

One of the wonderful gals who attended the  last workshop posted on her blog  “The Spice Box” her experience in the workshop.  It is such a thoughtfuly written piece that I wanted to share it with you. Sue has given me permission to post it here and I hope you enjoy her wit and humor as much as I did.  Thanks you Sue, I’m looking forward to the next workshop you attend.  Sandie 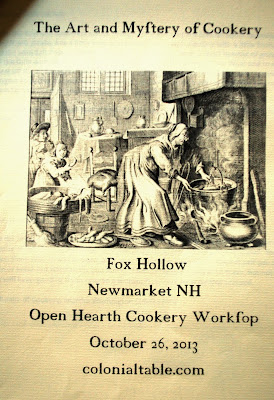 Nestled to the side of a lovely new house on a small dead end road in southwestern Newmarket, New Hampshire is a large colonial kitchen with a beautiful open hearth and accompanying side beehive bake oven. The woman who shares this kitchen is a font of knowledge when it comes to the ways of colonial housewives. Her name is Sandra Tarbox and she is , not only a hearthside cooking instructor, but also an historical interpreter for area historical museums and restored residences maintained by local historical societies. 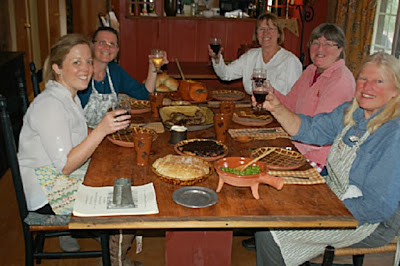 clock-wise from left Sara, Patty, Sandra, myself, and Nancy … a jolly crew …

Yesterday, Sprout Sara and I attended one of Sandra’s hearthside cooking events. Our group spent the day mincing beef and pork to make sausages, mixing and kneading two types of breads, roasting a whole pumpkin and stuffing it with a beautiful cabbage, apple, and onion vegetable stew, and and preparing a puff pastry tart that was topped with stewed prunes and whipped cream. And then? Well, of course! We sat right down and enjoyed the fruits of all the labor … what a wonderful meal! Excellent conversation and a sense of accomplishment settled in with the food and wine and camaraderie. Thank you, Sandra, Patty, Nancy, and Sara for a wonderful day!

Our day began, as we all introduced each other and were given the recipes that we would be creating … all historic and authentic (albeit with a few substitutions of modern ingredients to expedite the making). Some of the sources of the recipes were The accomplish’d housewife 1723 (John Notts ), The Book of Cookery, Martha Washington (1749-99), Early American Cooking -the Early American Society (1977), and The Art of Cookery Made Plain and Easy, Hannah Glasse. Sandra arranged her work stations so that we could all chat and watch what the others were doing, ask questions, and share the use of utensils and common ingredients. Meanwhile, the fire warmed the room and built a sizeable bank of coals that we used when cooking the various dishes. 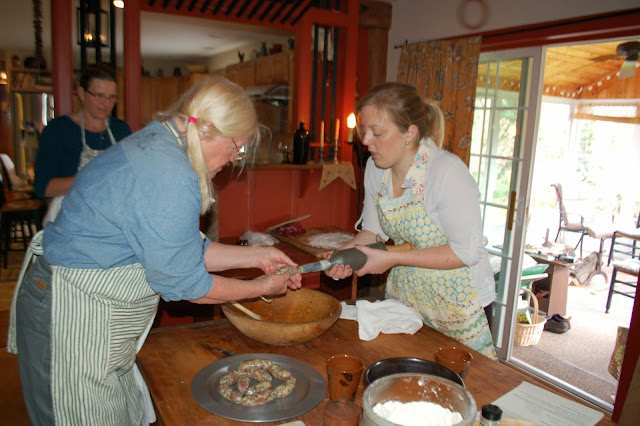 Nancy and Sara made one type of sausage and Patty and I made a second variety. Getting the sausage mixture into the casings was incredibly physical work, as well as the butt of much joking, but when they were done and ready for cooking, they made for a nice picture on the chargers. 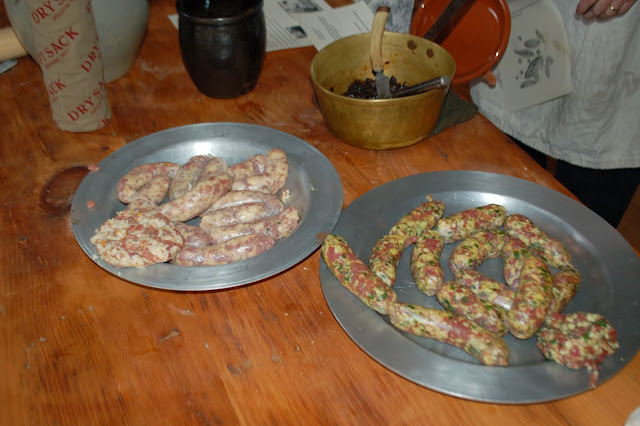 Nancy and I made breads to go with the sausages … a beautiful French bread dough made into small rounds and a soft cheese bread dough baked into two large free form loves. It was so satisfying to slide the bread into the beehive oven with the wooden peal and then begin to smell the warm yeasty aroma as it baked! However, we were too busy getting the rest of the meal put together to linger too long! There was butter to be churned and peas to be cooked gently over a bed of coals, the prune tart to be assembled,  heavy cream to be whipped with a willow whisk, the table to be set, the cooking areas to be cleaned up and the cooking utensils to be cleaned and carefully dried and stowed. It was a strenuous, but fulfilling day of kitchen work that I would do again in a heartbeat … of course the fun and companionship in the kitchen made for easy work and that was, indeed, spoken of when we all sat down to share the meal. Colonial cooking was labor intensive and we all agreed that having several sisters or daughters or indentured help or paid maids to help in  the scullery and with the firewood would have been a Godsend. The heat around the hearth is intense and one woman doing all the work could easily become overheated and exhausted by the exertion of hauling wood, tending the fire, raking coals, hoisting heavy cook pots, AND doing all the cutting, preparing, mixing, and cooking. It became apparent to me that the reasons for those seven days of household activities were sound when it came to saving the backs and the sanity of early housewives. Much of it had to do with time management too, I’m sure!

” Wash on Monday,
Iron on Tuesday,
Mend on Wednesday,
Churn on Thursday,
Clean on Friday,
Bake on Saturday,
Rest on Sunday.”
I will definitely be looking at future cooking events that Sandra hosts and would urge anyone with the curiosity about traditional hearthside cooking techniques to investigate a similar event near your home. If you are able to travel to the New Hampshire coastal region, look at Sandra’s website and see what she has to offer that interests you! It is such a terrific foodie adventure in cooking!
Here is Sue website link! Check it out?
http://thespicegarden.blogspot.com
Thanks Sue

PS. Sue went home and made the cheese bread again and added some wonderful ingredients.  Go to her site and see how she adapted the receipt, really great to see.